Spintops are among the oldest toys ever discovered by archaeologists. A clay top unearthed in Iraq was dated to 35th century BC—nearly six thousand years ago. The wooden top below was carved circa 1300BC and later discovered in the tomb of King Tut! In 8th century BC, the ancient poet Homer sung of tops in the Iliad. Fagles translates one passage as:

"Ajax caught up [a stone] and struck Hektor above the rim of his shield close to his neck; the blow made him spin round like a top and reel in all directions."

Tops made from fruits, nuts and seeds have been discovered amongst indigenous tribes throughout the world. It would seem a fascination with small spinning totems is nearly ubiquitous across cultures and though they come in all shapes and sizes, every top defies gravity in the exact same way.

A spinning top is held upright by angular momentum. As Newton said, objects in motion, stay in motion. They don't change direction or slow down without the application of an outside force. In fact, a well balanced top that is spun perfectly upright would never slow down if it were not for the energy lost to friction against the spinning surface.

Though the magical dance of the top is quite beautiful on a purely aesthetic level, human ingenuity soon recognized a greater potential for this ancient amusement and the top was enlisted for help with more practical purposes. Namely, gambling.

The "teetotum" is a flat sided top used to play a variety of "put and take" style games. In ancient Rome, the four sides were marked with the letters A, D, N and T which indicate the result of each spin. In latin Aufer means "take", Depone means "put down", Nihil means "nothing" and Totum means "all" or in this case, the whole pot. This game was quite popular during the European Renaissance and is depicted in several famous paintings. Such as Bruegel's Children's Games, c. 1560: One of the most famous forms of teetotum was developed by jews in Germany sometime around the 1500's. Their version, inspired by the German game of "trendel" was called "dreidel."

Another version of the teetotum called "Put and take" enjoyed a brief renaissance in America during the 1920's. The game was extremely popular across the country and many varieties of tops were produced predominantly in metal.

However, because of the simplistic nature of the game and ease of manipulating the tops, gaffed spinners and cheating became so prevalent that the game was quickly outlawed. Some gaffed put and takes have rounded edges to alter the odds of winning. Others contain more sophisticated mechanisms as pictured below. For the purposes of this post we will focus on tops that are spun by hand. In fact, many modern tops are still made by hand. Often from wood turned on a lathe. 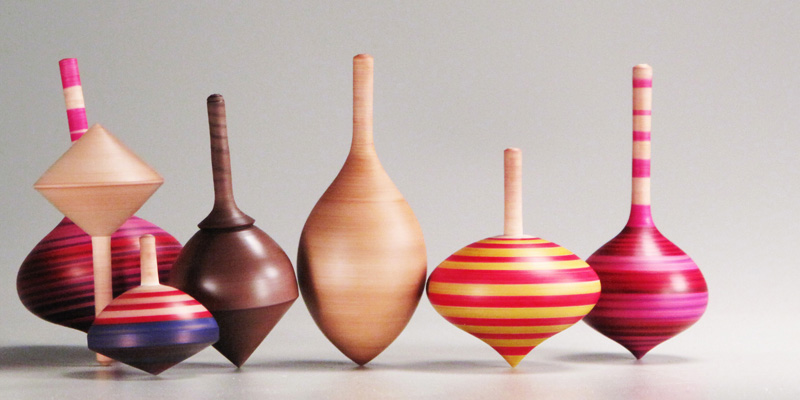 Using modern materials and technology designers have attempted to minimize friction as much as possible in order to create tops that spin for a very, very long time. Lacopo Simonelli currently holds the record with a non-mechanical top that spins for over 50 minutes.

Of course, one could nearly eliminate friction altogether with a magnetic spinning top.

As you can see, twirling tops have come a long way since the time of King Tut but this is only half of the amazing history of this enduring toy. In our next post, we'll discuss string driven tops from ancient china to the Las Vegas strip.